Gas Kilns at the Pottery 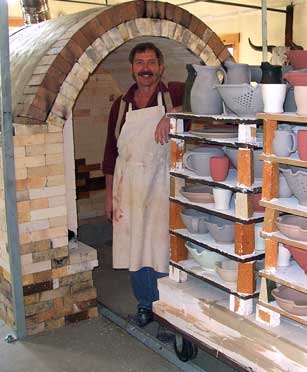 Robert built this kiln in 2008 after deconstructing his previous kiln built in 1977. He made many improvements over his previous gas kiln.
The gas kiln at Robert's studio is used primarily for bisque firing, as most of his work is fired in one of his wood fired kilns. However, he does high fire the gas reduction kiln to touch up pots that may have been under-fired, or had un-melted ash deposits from the wood kiln. He also uses the gas car kiln for special glazes such as Copper Red or Carbon Trapped Shino.

The large 6" wheels on this cart allow it to be rolled in and out of the kiln easily using a metal handle that screws into the frame. Robert's previous gas car kiln had 4" wheels and it was necessary to winch the cart in and out. 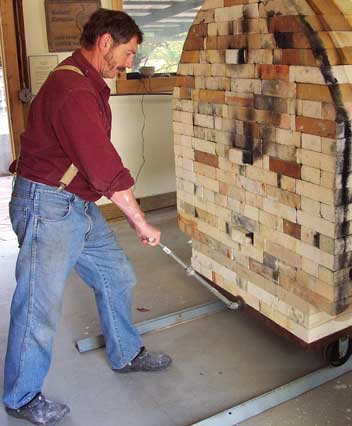 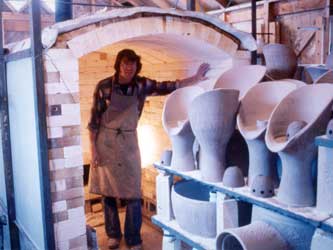 Robert built this kiln in the mid 1970s when his primary business was making Aquariums and Fountains. It was fired weekly for many years.

When Robert built his first wood kiln in 1993, the use of the gas kiln changed and began being used primarily for bisque firings. It was fired over 500 times during its tenure at the pottery.
The kiln in 2002 during a reduction glaze firing. 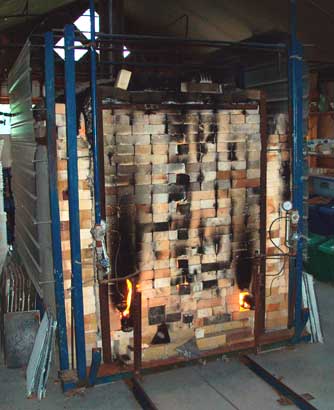 After the firing the glazed pots show the variety of reduction in the kiln chamber.
The darker reds show the areas of the kiln that experienced more "reduction of oxygen" during the firing.

This Gas Fired Salt Kiln served Robert well for six years. It was demolished in March of 200 to make room for his 250 cubic foot Noborigama Wood Kiln. 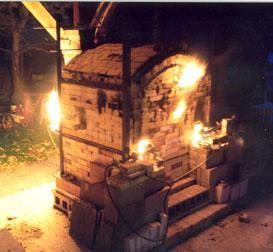 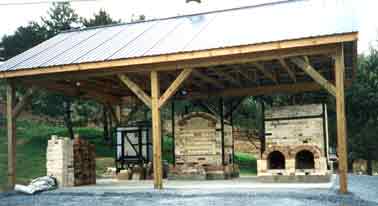 All of these kilns have been dismantled. The building was taken down and then doubled in size to make room for the Noborigama 250.

This was Robert's first kiln at his Bristol studio. Constructed entirely of insulating fire brick, it incorporated a two chamber design. The waste heat from the first chamber was used to bisque fire green ware in the second chamber.

Construction of the Two Chambered Kiln.

An article about this design was published in the 1975 December Issue of Ceramic Review, London, England: "Two Chambered Kilns, A New Approach," by Robert Compton.

View into the glaze chamber filled with planters, after a firing. 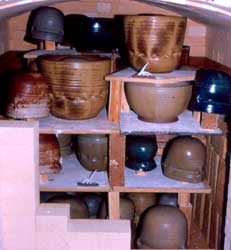